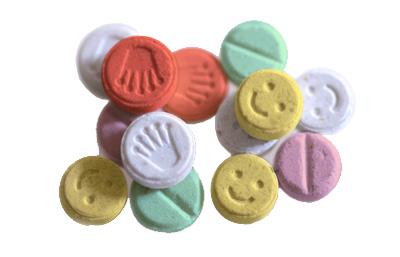 MDMA or Ecstasy (3-4-methylenedioxymethampheta-mine), is a synthetic drug with amphetamine-like and hallucinogenic properties. It is classified as a stimulant.

Taken in pill form, users sometimes take Ecstasy at “raves,” clubs and other parties to keep on dancing and for mood enhancement.

Users report that Ecstasy produces intensely pleasurable effects — including an enhanced sense of self-confidence and energy. Effects include feelings of peacefulness, acceptance and empathy. Users say they experience feelings of closeness with others and a desire to touch others. Other effects can include involuntary teeth clenching, a loss of inhibitions, transfixion on sights and sounds, nausea, blurred vision, chills and/or sweating. Increases in heart rate and blood pressure, as well as seizures, are also possible. The stimulant effects of the drug enable users to dance for extended periods, which when combined with the hot crowded conditions usually found at raves, can lead to severe dehydration and hyperthermia or dramatic increases in body temperature. This can lead to muscle breakdown and kidney, liver and cardiovascular failure. Cardiovascular failure has been reported in some of the Ecstasy-related fatalities.

After-effects can include sleep problems, anxiety and depression.

Repeated use of Ecstasy ultimately may damage the cells that produce serotonin, which has an important role in the regulation of mood, appetite, pain, learning and memory. There already is research suggesting Ecstasy use can disrupt or interfere with memory.