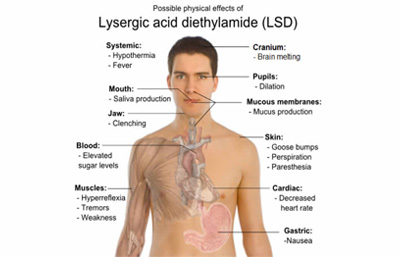 What is is LSD?

LSD is the most common hallucinogen and is one of the most potent mood-changing chemicals. It is manufactured from lysergic acid, which is found in ergot, a fungus that grows on rye and other grains.

LSD is usually found on “blotter” paper (paper that is perforated into small squares). The squares or “tabs” may be colored or have images printed on them. Liquid LSD is a clear liquid, usually in a small container, tube or flask. LSD can also be found in thin squares of gelatin.

LSD is taken orally. Gelatin and liquid can be put in the eyes.

The effects of LSD are unpredictable. They depend on the amount taken, the user’s personality, mood, and expectations, and the surroundings in which the drug is used. The physical effects include dilated pupils, higher body temperature, increased heart rate and blood pressure, sweating, loss of appetite, sleeplessness, dry mouth, and tremors. Sensations and feelings change much more dramatically than the physical signs. The user may feel several different emotions at once or swing rapidly from one emotion to another. If taken in a large enough dose, the drug produces delusions and visual hallucinations. The user’s sense of time and self changes. Sensations may seem to “cross over,” giving the user the feeling of hearing colors and seeing sounds. These changes can be frightening and can cause panic.

Some LSD users experience flashbacks, recurrence of certain aspects of a person’s experience even if the user doesn’t take the drug again. A flashback occurs suddenly, often without warning, and may occur within a few days or more than a year after LSD use. Most users of LSD voluntarily decrease or stop its use over time. LSD is not considered to be an addicting drug because it does not produce compulsive drug-seeking behavior like cocaine, amphetamines, heroin, alcohol, or nicotine.